Another new host has joined the Home Datacenter (#HomeDC). This one is my first low powered Intel Xeon D-1500 server I get my hands on. There have been some great install guides about other Supermicro X10SDV motherboards on many sites, and I would recommend that you head over to Paul Braren’s (@tinkertry) TinkerTry site for a lot of great content. There are now also two small server from Supermicro that came out E200-8D and E300-8D. The motherboard I selected for my new host closely matches the one on the Supermicro E300-8D, described on TinkerTry.

I was looking for a motherboard that had great storage capabilities, 10G connectivity and low powered. As my Home Datacenter (#HomeDC) is growing, I find myself using more and more 10G SFP+ connectivity. This 10G SFP+ connectivity consumes less watts in the chipset, creating less heat inside the servers. SFP+ connecitivty allows me to use cheaper network switches. 10G Ethernet with RJ45 has a price premium, even if the Category 6A cables are cheaper than Passive Copper SFP+ cables.

I selected the Supermicro X10SDV-4C-7TP4F motherboard, it has a 7 year product life, support two SFP+ 10G connection, comes with a LSI/AVAGO 2116 SAS/SATA chipset with a total of 16 SAS ports. More than enough for a storage server. It comes with a M.2 socket and a mSATA socket. The Intel Xeon D-1518 is a quad cores processor running at 2.2Ghz. All in all a very good selection of specifications on such a small FlexATX motherboard. 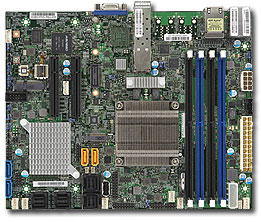 The X10SDV series of motherboards come with the Intel X552 dual 10G network card. In case you are experiencing network connectivity issues, it is important to make sure your motherboard has the proper firmware. When I received my motherboard with the default bios 1.0, it gave me a serious scare. I was unable to get the two 10G links up with my Cisco SG500X and SG500XG switches. I had to upgrade to version 1.0a and clear the CMOS to get it to work.

I’ve been a long time user of the Fractal Design cases, and I wanted to have something small for the FlexATX, yet with lots of space for adding disks. So I selected the Fractal Design Node 804 cube chassis that supports MicroATX, MiniATX and the FlexATX like the Supermicro X10SDV series. The Node 804 is capable of having upto 10x 3.5″ disks. The case comes with three fans and a fan selector that is powered by a SATA power connector, so fans can run independant of the motherboard connectors. This is very usefull when you add a small Noctua NF-A6x25 PWM fan on top of the CPU heat sink. It is not spinning-up and down at the whim of the Supermicro motherboard choosing. I also liked the square look of the chassis. 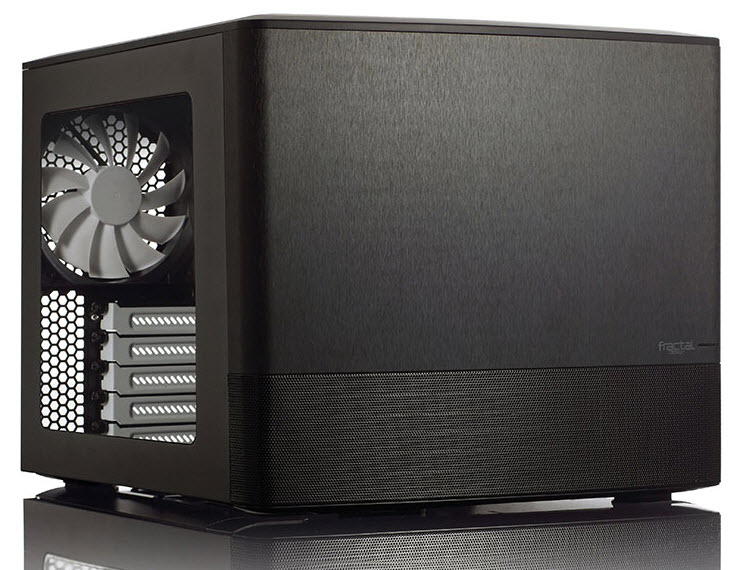 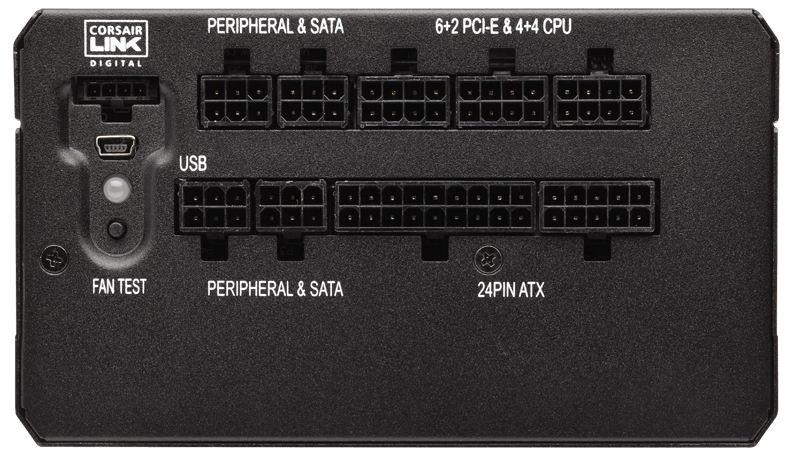 The Supermicro X10SDV-4C-7TP4F comes with the following expansions for storage.

In the M.2 socket, I added a Samsung SM951 512GB NVMe Solid State Disk and in the Mini PCI-E, I added the Samsung 850 EVO 1TB Basic Solid State Disk. The mSATA drive is used as the Boot device and to have a large datastore to keep VMs local to the host. The Samsung SM951 512GB NVMe SSD can be used for the caching part of a VSAN design or a rfcache when running scaleIO.

Another up front warning, before you place this motherboard in a chassis, you need to make sure to un-screw the mSATA holder stick to the right position, so you can use a standard mSATA. There is a tiny screw on top and bottom of the mSATA holding bolt.

The Supermicro X10SDV-4C-7TP4F CPU cooling is done with a passive CPU heat sink. But during the initial memory testing, I have found that the IPMI CPU Sensor was showing Critical heat warning during a memtest86+ run. I decided to add the Noctua A6X25 PWM fan on top of Xeon D-1518 processor. The fit is perfect, and when this fan is connected on the chassis fan subsystem (see the top right section in the photo at the bottom) the critical heat issues disappeared.

So let’s recap the Bill-of-Materials (BoM) for this server the way I have configured. The pricing has been assembled from amazon/newegg in the US, amazon/azerty.nl for the Euro and with Brack.ch for Switzerland. I have left out the cost of the HDD, as Your Mileage May Vary.

I will create a 2nd post on the build notes and pictures, but here is a teaser. 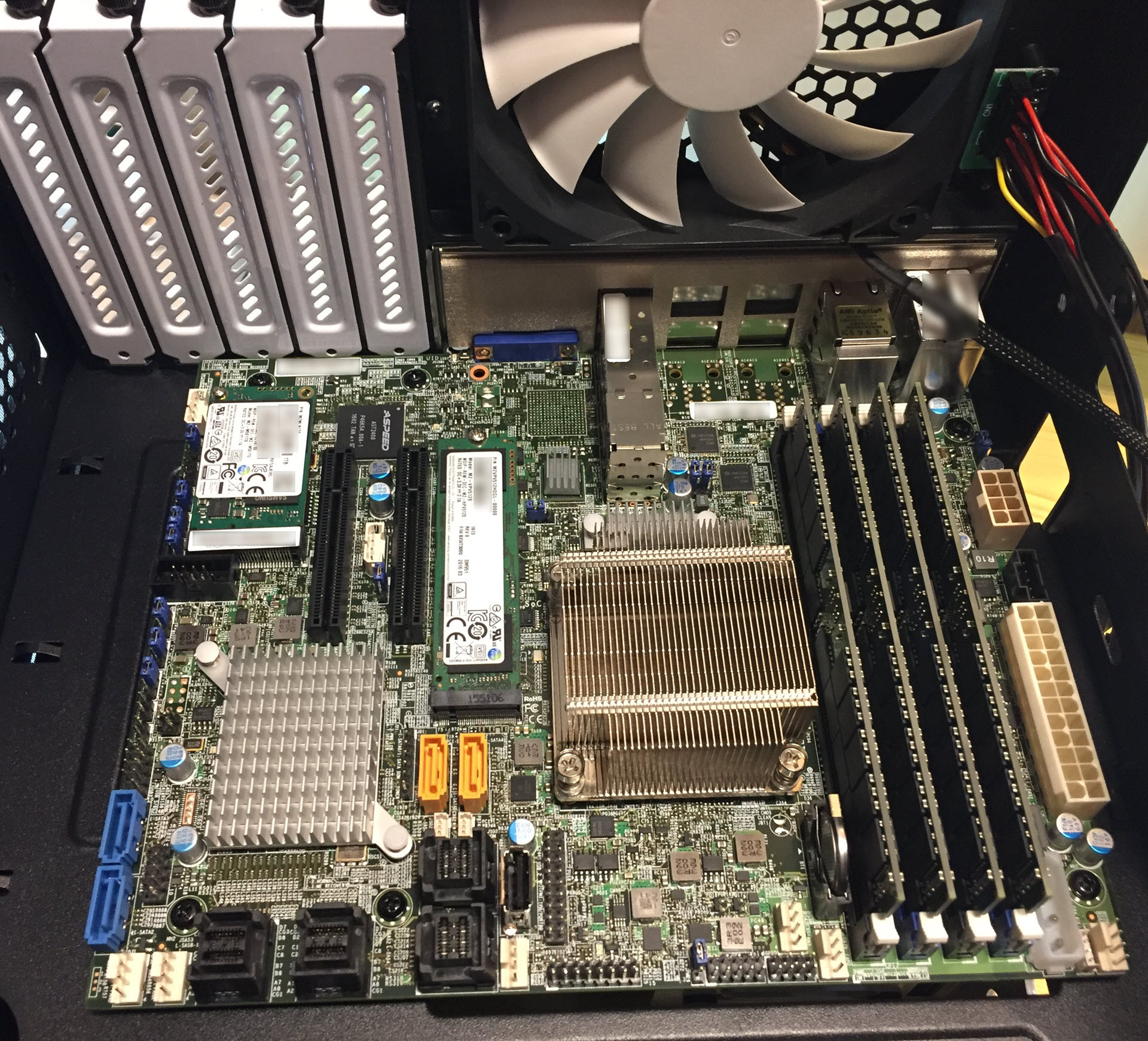