This is to give you a quick insight in my 2013 Homelab that is running vSphere 5.5 and has a running version of Virtual SAN (VSAN) in Beta code. I have been quiet on the blog for a while, as I’ve been doing some tests with vSphere 5.5 and VSAN, but the NDA has limited my communications.

This is probably the smallest VSAN implementation you can do without going with a Nested VSAN (Awesome design by William Lam) or with three Mac Mini’s.

This VSAN is only 24cm x 22cm x 20cm (High x Depth x Width), and runs with 130 Watts total consumption. On the following screenshot you see the Homelab next to an old Synology DS1010+ 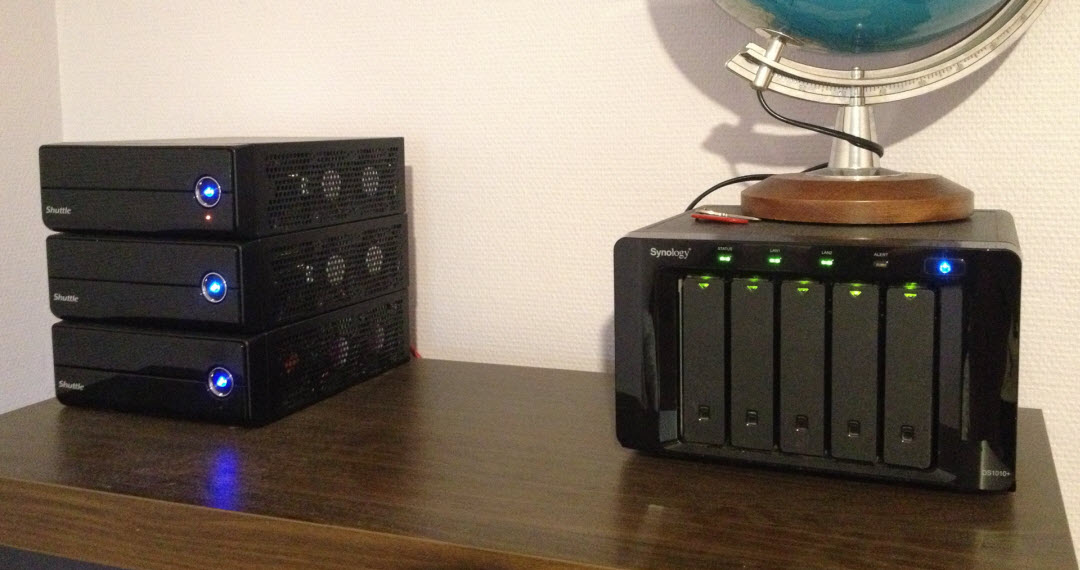 It is composed of three Shuttle XH61v with a quad-core i7-3770s processor (65W) and 16GB of memory (Two 8GB Kingston SO-DIMM). The Shuttle XH61v also comes with two Gigabit network cards. Each Shuttle XH61v has the following storage

That is a lot of storage in such a small case, but it works, and you don’t even hear the ventilator (for Wife Acceptance Factor approval).

I’m not going to cover in this article how you need to create a VMkernel interface for VSAN, and that you need to disable HA before turning VSAN on. This article “VSAN How to Configure” by David Hill does an excellent job, and his follow-up post “Configure disk redundancy in VSAN” adds more information.

From the vSphere Web Client, this is the configuration of my VSAN after I enabled it.

So once you enable the VSAN with three hosts that each have an empty SSD and HD (in my case 240GB SSD and 750GB HD) you get the following.

Another great functionality of the VSAN, is that if you take another ESXi host and configure it’s VSAN VMkernel interface and add it to the VSAN Resource, it automaticaly mounts the VSAN Datastore. This will greatly simplify the provisioning of storage in a vSphere Cluster. The VSAN Datastore is also the first implementation of Virtual Volumes (VVOL) that I have seen. Cormac Hogan has a great Virtual Volume (VVOL) Tech Preview article.

The Virtual SAN from VMware should be available in Beta for a wider audience very soon, so go over to VMware VSAN Beta Register.